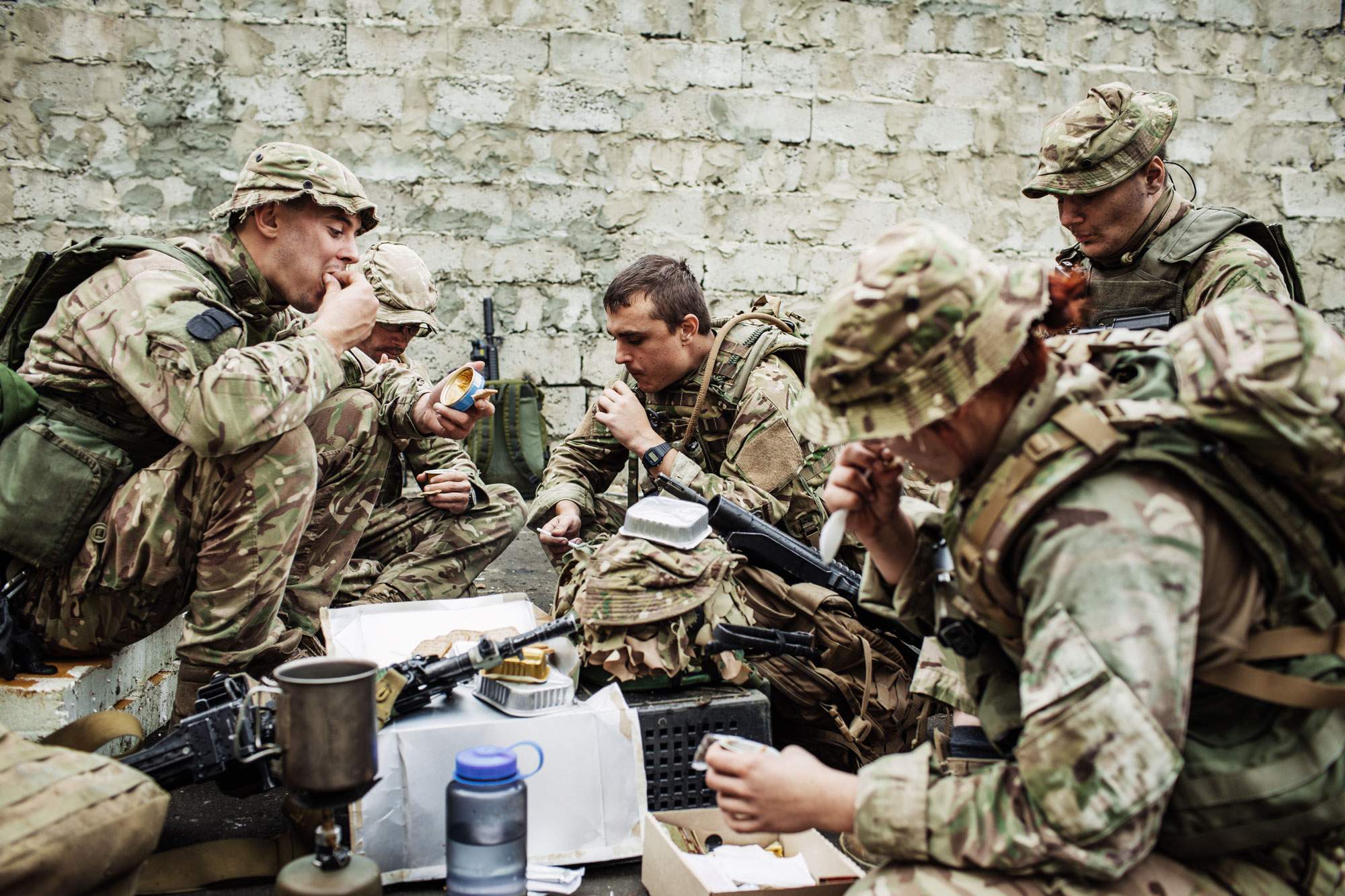 The Gastronomer's Guide to Travel

Food & Ammo: A Journey Through Military Kitchens and Battlefront Meals

Food & Ammo: A Journey Through Military Kitchens and Battlefront Meals

No matter what beat a soldier marches to, they’re not going to get very far on an empty stomach. Whether out in the field or back at the base, a soldier’s gotta eat. If we look at the evolution of warfare from antiquity to present day, we notice a growing overlap of influences when it comes to tactics, equipment, and methodology. But this influence is never more apparent than when it comes to the food soldiers eat.

“War, as a means of territorial control, means an imposition of cuisine. As empires encroach on foreign lands, they bring with them the vocabulary and foods of their home.” If we compare the diet of an Ancient Spartan soldier to that of a Soviet WWII soldier or an American soldier in the 21st-century, we notice a pattern of influence, as certain diets are passed down and, in some cases, modified to accommodate the rigors of modern life and a growing understanding of nutrition.

Here, we take a look at 5 of the world’s greatest armies and how they filled their bellies!

We owe a lot to the Greeks. They laid much of the groundwork in the fields of mathematics, politics, and science, to the point that one could argue they built the foundation of modern civilization (if you’re curious, check out some of their other contributions).

Now, if you’ve ever attended a dinner party hosted by Greeks, or if you’ve had the chance to make your way to their side of the Mediterranean, then you’ve got even more reason to be thankful for their contributions (spanakopita anyone?). But, if we look at the food on a Greek soldier’s plate in antiquity, we find substantially less diversity than today.

The diet of a Greek soldier was comprised mainly of grain (lots of barley) and legumes, like lentils and chickpeas. These ingredients were key not just for their nutritional value and their preservability over long periods, but for their versatility. Unfortunately, the Greek soldier was not immune to the boredom of a repetitive diet, and found that he “could improve his daily meals by buying at local markets, requisition in the field or simple pillage.” Of course, over time and with the growing influence of other cultures (most notably the Romans), the Greek diet for soldier and civilian alike began to include ingredients that have now become recognized as quintessential Mediterranean cuisine.

We can’t guarantee that a diet of lentils and pita bread will be enough to give you the shredded look of a Spartan soldier (think Gerard Butler in 300), but it might just be the right place to start.

At its peak, the Roman Empire spanned what is today most of Western Europe and North Africa: from modern-day Armenia in the east, the UK in the west, and Egypt in the south. With an ever-growing army capable of concurring most of a continent, there’s no doubt that keeping the Empire’s soldiers well-fed was vital.

Like the Greeks, the Roman diet consisted mainly of grain (cereal & barley), with each soldier given daily rations of meat, cheeses, and wine. Additionally, due to the length of some military campaigns, soldiers had to find ways to make their food last, especially when in locations where supplies were hard to come by. To this end they were given salt which, along with its function as a seasoning, helped preserve the meats provided to them.

Although the empire would eventually fall, and the countries it once ruled would develop their own unique cultures, the Roman influence in the kitchen was there to stay. Their various methods of baking bread and their love of wine undoubtedly spread to those regions that were once under Roman authority. If we had to narrow down Rome’s culinary contribution to a single dish, it would hands-down be pasta — easily enough to earn them their hall of fame spot. What had once been a preparation method used to spruce up a wheat-heavy diet has since become a simple dish that gives sustenance to athletes, soldiers, and lazy college students worldwide.

In the modern era there are very few names that garner the same amount of fascination and intrigue as Napoleon Bonaparte, the diminutive military-leader-cum-emperor. He rose to prominence during the French Revolution which brought a tidal wave of change across Europe.

On the surface, it seems unlikely that Napoleon would have marched to so many victories without keeping his soldiers well-fed. The diet of his army, like many military regimes before, was heavy in grain and meats, with additional rations of beans, rice, wine, and vinegar. But while this standard military diet would have been enough for any soldier on a good day, one scholar suggests that, “Napoleon’s soldiers spent most of their time desperately hungry.” Whether this led to his eventual defeat at Waterloo is unclear; however, agriculture development made it so that his soldiers, in times when rations were short, could feed themselves on corn and potatoes. The same source suggests that “the baguette was developed so that French soldiers could carry their bread in the legs of their trousers.” (Insert third leg joke here.)

Eventually, Napoleon’s ambition proved to be bigger than his army and he met his downfall at the Battle of Waterloo. Although his name is heavily featured in our history books, his legacy goes beyond books and battlefield, to the bakeries and sweet shops of Russia, where merchants used his image to sell sweets, and even went so far as to name their favorite dessert after him.

The close of the 19th-century brought with it a different kind of revolution which led to a boom in technology and industrialization across Europe. At the forefront of this desire to innovate was the military, looking once again to gain the upper hand in combat through new machines and weaponry. And, in these times of innovation when tools lacked, the creative spirit flourished.

This was equally apparent in the Soviet camp as the cooks sought to keep their soldiers well-fed during long campaigns. You won’t be surprised to learn that a soldier’s diet hadn’t changed all that much up to this point, consisting mainly of wheat (bread, macaroni), meats, oils, seasonings, and vegetables (potatoes, carrots, beets). Of course, the menu may have varied depending on supplies and where you were stationed; those in the fields had limited access to food, compared to those stationed at bases who had entire kitchens at their disposal.

Still, this didn’t stop the Soviets from bringing some of that wartime innovative spirit out into the battlefield. They used field kitchens, which were essentially trolleys decked out with cauldrons and storage compartments. This gave them more options when it came to preparing the soldiers’ meals, and allowed them to cook for larger numbers at once.

Creative means also led to more creative recipes. Given the limited number of ingredients at hand, they’d find new ways of making standard dishes. One of the many examples is Rzhevsky bread, “made by boiling potatoes, removing the skins and putting the potatoes in a meat grinder.” So, if ever you’re tired of that boring loaf of evenly sliced Wonder Bread, find yourself a Russian bakery or try making your own potato bread at home!

In the age of Google, where we have the world at our fingertips and can travel halfway around it in a day, it seems funny to think that the military has only recently devised a way to make pizza that lasts longer than a week (turns out the secret was in the dough).

Even amidst our culture of TV dinners and Uber Eats, soldiers are still limited to foods that can be easily carried and kept for long periods of time. The military menu, what the US calls MRE’s (meals, ready to eat), has taken huge strides over the past fifty years to create options that are both varied, appetizing, and easy to pack. Depending on the country, options range from pasta (Italy, US), to deer pâté (France), to green beans and ham (Spain), and salmon fillet (Canada). These dishes, most of them vacuum sealed in pouches, are not going to win any culinary awards; however, they do serve to feed the men and women out in the field and far from home.

Countless hours of research, millions (if not billions) of dollars invested, and the greatest innovation to date is that soldiers now get to enjoy pizza on the battlefield. Oh well, when in Rome…

To discover the lands upon which these armies marched and feasted, make sure to book a unique Mediterranean vacation rental today!

Why You Need to Try Rock Climbing in Croatia

Why You Need to Try Rock Climbing in Croatia